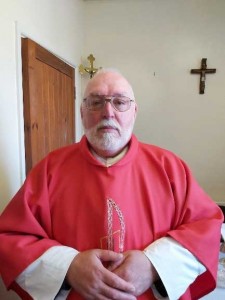 Father Philip was born in London in 1959; however, he considers himself a ‘Welshman’ and therefore supports Wales! Father grew up locally in the parish of Chipping Camden.
The first thoughts he had to join the priesthood was after the Easter Vigil at a seminary in Ushaw, Durham. At the time he was a member of the Church of England and sought to answer that vocation. After spending 18 months working in England and Australia working with the Missions of Seamen before commencing his training at Chichester Theological College. He was then ordained as an Anglican priest in 1987, working in the Manchester area. His personal pilgrimage began to draw him closer to the Apostolic See, whilst there reflecting on the issues of authority and proposed changes in the C. of E. Father then wrote to the Bishop of Clifton, the Late Bishop Mervyn Alexander about how he felt and also had talks with the abbey of Downside and was then received into the Catholic unity at the Abbey during 1993.
The desire to serve as a priest was still what he very much wanted and was accepted by the diocese. Bishop Mervyn asked him to complete his preparations for the priesthood for two years at the Beda College, Rome. Father became a priest on 12th July 1996 at Downside Abbey, along with Frs. Michael Fountaine and Ian McCarthy.
Father’s first appointment as a curate was in Salisbury, followed by becoming a PP in Marlborough and then in 2008 as Parish Priest at SS Joseph and Theresa in Wells. Father Philip then came to St Michael’s Tetbury and St Peter’s Cirencester during September 2019, where we hope that he will be with us for many happy years. We promise him our prayers and support as he deepens our faith and understanding and he leads us forward as our priest and shepherd.